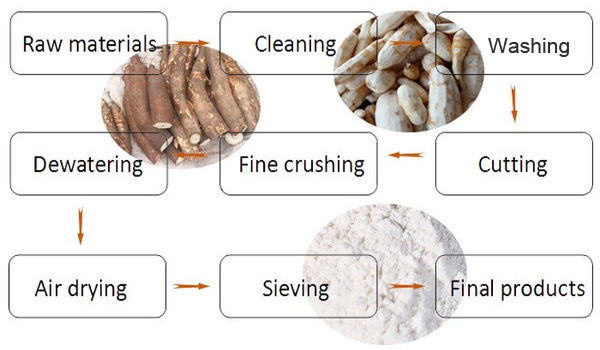 Below is the brief description of the production of cassava flour steps:

Step 1. Usually use two machines dry sieve and paddle washer. We all know that cassava is bigger than other potatoes, dry sieve main function is remove the dirt, sand, or other impurities which mixed with cassava.Mixed cassava with water, fully remove the soil in cassava surface.

Step 2. After cleaning, grind the cassava with grating machine.The raspers mainly used in the production of cassava flour steps.

Step 3. Using plate and frame filter press to dewater. Plate-frame filter press is an effective type of dewatering equipment. It is used for various solid-liquid separation. Filter press is for large filtration plants that requires a high degree of automation or centralized control. The whole machine for production of cassava flour steps is designed with integration of machine, electricity and liquid, which can realize automatic pressing, filtering, draining, squeezing, loosening and so on with a high degree of automation, large production capacity, small filter cake and high output. After using Plate-Frame, the cassava flour water content less than 40%. 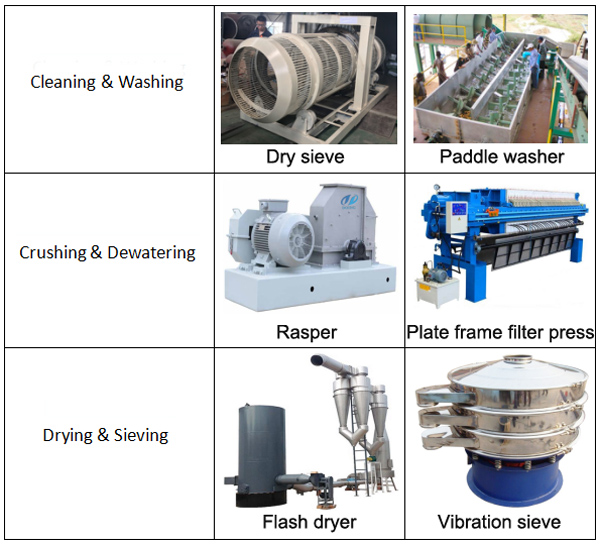 Cassava is native to Brazil, and it was widely spread by the Portuguese in tropical and subtropical regions of Africa, Asia and the Caribbean from the 16th to the 17th century. Nowdays, cassava production is well-developed as an organized agricultural crop. As you can see, the equipment in the cassava flour factory including dry sieve, paddle washing machine, rasper, Plate-Frame filter press, and flash dryer.

Production of cassava flour steps is well-developed as an organized agricultural crop in many countries. It has well-established multiplication and processing techniques for food products and cattle feed.  Cassava is grown throughout the year, making it preferable to the seasonal crops of yam, beans or peas. It displays an exceptional ability to adapt to climate change, with a tolerance to low soil fertility, resistance to drought conditions, pests and diseases, and suitability to store its roots for long periods underground even after they mature.  Believe after reading this essay, you will have a better understanding on the production of cassava flour steps.

NEXT：How to start a garri factory ?