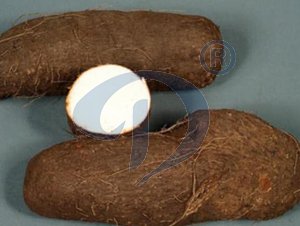 Yam is the common name for some species in the genus Dioscorea (family Dioscoreaceae). These are perennial herbaceous vines cultivated for the consumption of their starchy tubers in Africa, Asia, Latin America and Oceania. There are many cultivars of yam though only six are important as staples in the tropics. The economically important species grown are Dioscorea rotundata (white yam), Dioscorea alata (yellow yam), Dioscorea bulbifera (aerial yam), Dioscorea esculenta (Chinese yam) and Dioscorea dumenterum (trifoliate yam). Yams are high in vitamin C, dietary fiber, vitamin B6, potassium, and manganese; while being low in saturated fat and sodium.

Worldwide yam production in 2007 amounted to 52 million tons, of which Africa produced 96%. Most of the world's production comes from West Africa representing 94%, with Nigeria alone producing 71%, equaling more than 37 million tons. Though yams can be stored up to six months without refrigeration most of the yearly production is lost through spoilage because of lack of post-harvest facility in the country.